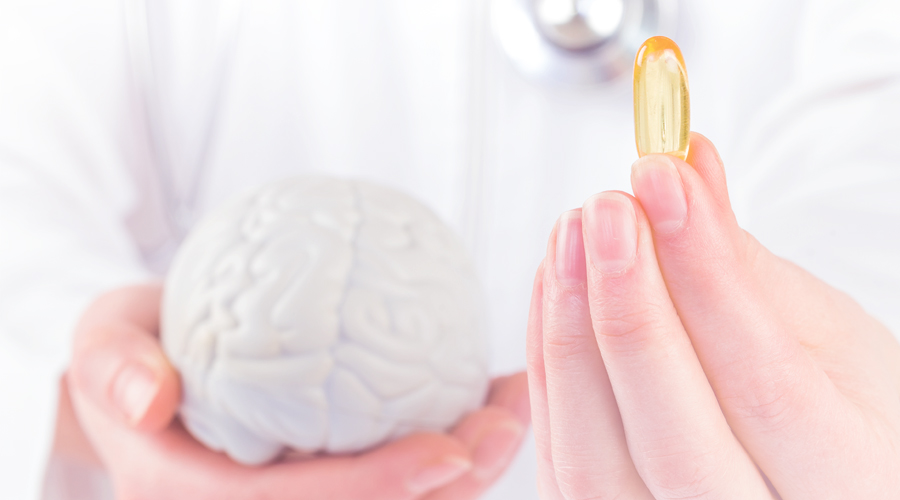 Docosahexaenoic acid (DHA) is an omega-3 polyunsaturated fatty acid that is particularly abundant in the brain and retina. DHA is associated with supporting brain health. Lower levels of DHA have been associated with smaller hippocampal volumes, accumulation of amyloid plaques, and overall lower cognitive function.

DHA is primarily derived from marine sources. A dose-response meta-analysis has been correlated with a lower risk of dementia and Alzheimer’s disease (AD) that aggregated 21 studies with more than 180,000 participants.

DHA may also provide protective effects on dopaminergic neurons, and it may be associated with a lower risk of Parkinson’s disease. DHA is often paired in supplementation and research with eicosapentaenoic acid (EPA), another omega-3 fatty acid. Both DHA and EPA have been shown to promote synaptic plasticity and the inhibition of synaptic loss and to support anti-oxidation processes.

It’s all in the dose.

The brain-supportive effects of DHA may be dose-dependent. A randomized placebo-controlled clinical trial assessed the efficacy of DHA supplementation on cognitively unimpaired individuals over 55 years of age with a first-degree family history of dementia. The treatment arm received 2,152 mg of DHA per day for six months. All participants received B vitamin supplementation due to the critical role of vitamin D in incorporating DHA into circulating phospholipids.

Roughly half of the study participants were APOE4 carriers, the gene associated with Alzheimer’s disease risk. The level of DHA in cerebrospinal fluid (CSF) was measured at both the beginning and the end of the study. CSF DHA levels increased in individuals in the treatment arm. However, CSF levels did not increase as much in APOE4 carriers as they did in non-carriers. The authors of this trial suggested that omega-3 fatty acid doses >2 grams daily may provide a dose “outcome” response.

Some metabolites of DHA have been shown to have anti-inflammatory and neuronal protective effects. A recent study assessed the effects of DHA and its metabolites on animals with Parkinson’s disease induced by rotenone, a pesticide that inhibits mitochondrial function. The study results indicated that DHA metabolites improved motor dysfunction and induced nuclear factor erythroid 2-related factor 2 (Nrf2)-regulating antioxidant genes, contributing to the possible protective effects of DHA against Parkinson’s disease.

Another recent animal study assessed the effect of DHA supplementation on developing brains. The study showed that supplementation with DHA significantly improved the learning ability in two groups of young mice at 3-weeks and 7-weeks of age. This research analyzed the difference between DHA when esterified to triglycerides or phospholipids from sources such as krill oil. DHA as phospholipids was associated with a more significant improvement in cognitive deficiencies and higher brain DHA accretion. In addition, the younger mice demonstrated better performances of spatial task tests when supplementation with DHA, as phospholipids were provided.

Typically, omega-3 fatty acids, such as DHA, are not found in sufficient quantities in the standard American diet. DHA can be obtained from dietary sources, such as salmon, krill oil, sardines, oily fish, and supplementation. DHA supplementation may support overall cognitive health, and it may play a role in the prevention of neurodegenerative diseases.